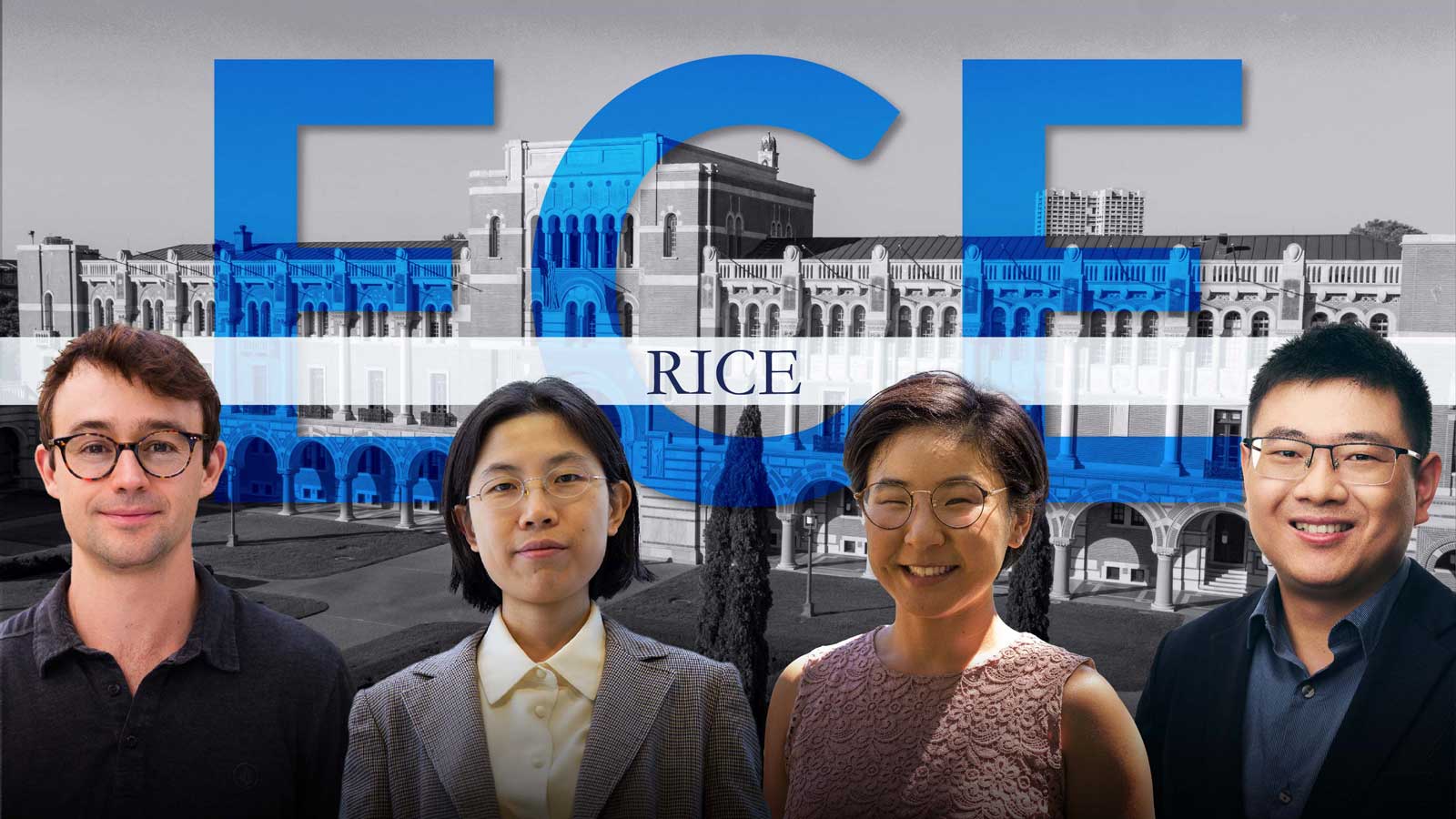 Four new faculty members are bringing their expertise to the Electrical and Computer Engineering (ECE) Department at Rice, part of the addition of two new initiatives—the Digital Heath Initiative and the Quantum Initiative.

Shengxi Huang, assistant professor of ECE:
Huang joined ECE at Rice in July of 2022 as part of the Rice Quantum Initiative. She earned her M.S and Ph.D. in Electrical Engineering and Computer Science from MIT in 2013 and 2017, respectively. She received her B.S. with the highest honors from Tsinghua University, China. She did postdoctoral research in the Departments of Electrical Engineering and Applied Physics at Stanford University after attaining her doctorate. Before joining Rice, she was an assistant professor in the Department of Electrical Engineering, Department of Biomedical Engineering, and Materials Research Institute at The Pennsylvania State University. She is also leading the SCOPE (Sensing, Characterization, and OPtoElectronics) Lab in the ECE Department at Rice. Huang has been recognized with the NSF CAREER award and the AFOSR Young Investigator award. Her research focuses on light-matter interactions of quantum materials and nanostructures, and the development of new quantum optical platforms and biochemical sensing technologies.

Kevin Slagle, assistant professor of ECE:
Slagle joined the ECE Department at Rice in July of 2022 as part of the Rice Quantum Initiative. He earned his Ph.D. in theoretical condensed matter physics from the University of California, Santa Barbara in 2016 and his B.S. degrees in Physics and Mathematics at the University of California, Irvine in 2011. Before joining Rice University, he was a Postdoctoral Fellow at the University of Toronto and a Sherman Fairchild Postdoctoral Scholar at the California Institute of Technology (Caltech). He was the recipient of the Sherman Fairchild Prize Fellowship from 2018 to 2022 and the Barry M. Goldwater Scholarship in 2010. His research involves the theory of emergent phenomena in quantum matter and fundamental physics. This includes the theoretical study of superconductivity and topological orders, along with their experimental realizations within quantum simulators and other highly tunable platforms.

Lei Li, assistant professor of ECE:
Li will be joining ECE at Rice in January of 2023 as part of the Rice Digital Health Initiative. He earned his Ph.D. from the Department of Electrical Engineering at the California Institute of Technology (Caltech) in 2019. He received an M.S. from the Department of Electrical and System Engineering from Washington University, St. Louis, in 2016. After receiving his doctorate, Li continued to do research at Caltech as a postdoctoral scholar in the Department of Medical Engineering. He was selected as a TED fellow in 2021 and received the Charles and Ellen Wilts Prize from Caltech in 2020. In 2019 he made it to the “MIT Technology Review Innovators Under 35” list in China. His research focuses on Biophotonics, Medical Imaging, Neuroimaging, Artificial Intelligence, Computational Imaging, Image Reconstruction, Biomedical Instrumentation, Medical Devices and Optical Sensing. Li’s overarching research goal is to develop new biomedical imaging technology that combines light, sound, and artificial intelligence to visualize deep brain functions, diagnose early-stage cancer and navigate microrobots for internal surgery.

Momona Yamagami, assistant professor of ECE:
Yamagami will be joining ECE at Rice in July of 2023 as part of the Rice Digital Health Initiative. She earned her M.S. and Ph.D. in Electrical Engineering from the University of Washington, Seattle in 2019 and 2022, respectively. She received her B.S. in Bioengineering from Rice University in 2016. She is currently a postdoctoral scholar at the University of Washington, Seattle in the Computer Science & Engineering department and as part of the Center for Research and Education on Accessible Technology and Experiences (CREATE). She served as an instructor at the University of Washington, Seattle, on the subject of Control System Analysis in 2021 and as the Microsoft Research Ph.D. intern in 2020. She is the recent recipient of the Meta Research Award of $150,000 for a proposal titled “Framework for Diverse EMG Gesture Recognition.” Her research focuses on improving the accessibility of human-machine interfaces for people with and without limited motion using data-driven modeling, control theory, and wearable sensor technologies.